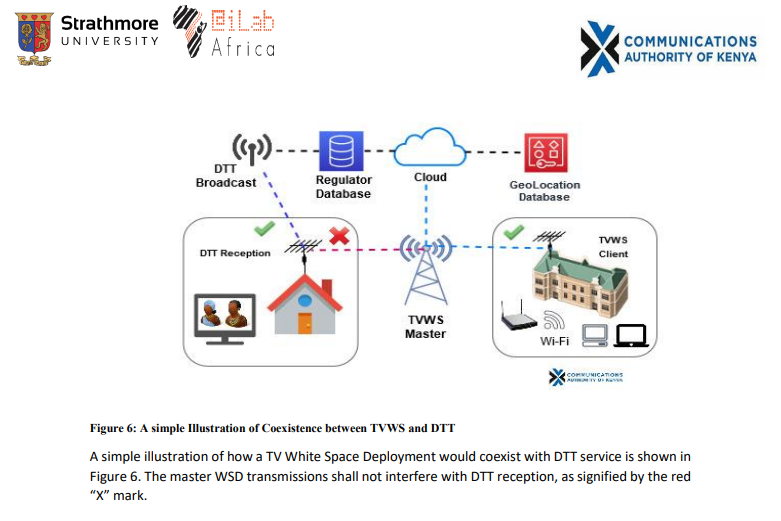 This project aimed at carrying out a validation exercise and stakeholder consultation on the draft framework for Television White Spaces (TVWS) developed by the Communications Authority of Kenya (CA) and Strathmore University (SU). The CA will ratify the draft framework in the coming days to adopt it as the official framework for authorisation of TVWS deployments in Kenya.

The draft framework forms the foundation of Dynamic Spectrum Access (DSA) implementations in Kenya setting the stage for future spectrum sharing initiatives for the country. The studies specifically investigated spectrum sharing for Fixed Broadband services in the UHF Television (TV) band (470-694 MHz) as an enabler of rural wireless Internet access.

Field studies were conducted in Laikipia, Kitui and Kisumu counties; technical demonstrations were done in Nanyuki (Laikipia county) using the new equipment and resources provided by partners from the Dynamic Spectrum Alliance. This work has built on top of previous collaborative research led by the University of Strathclyde (Scotland, UK) in partnership with Strathmore University (Kenya), Copperbelt University (Zambia), University of Ghana (Ghana) and University of Malawi (Malawi). Moreover, it has also been supported by the TVWS journey formulated by the CA back in 2013 when the first trial license for TVWS was issued.

The draft framework inviting public participation was published on the CA website on 3rd March 2020. Stakeholders were also invited to share comments, ideas and….

To read more on the report please click here>>